It came as a bit of surprise to everyone but once more details and new policies about the game was revealed, many game critics took to the internet and voiced against the anti-consumer approach of Microsoft. After Sony got all the love from gamers across the world with their best E3 conference ever, it couldn’t get any worse for the Xbox One brand as it was literally condemned to hell.

Here are few things that have been said about the Xbox One. I do not know how many gadgets have survived this intensity of Negative PR, but Microsoft has got a stack load of cash to spend in advertisement, whether or not that will help remains a mystery.

“Let’s say you leave your console behind for more than 24 hours, maybe for a weekend trip or a weeklong vacation, and when you return, for whatever reason, your Internet’s not working. If I understand this correctly, you won’t be able to play games on the console until you solve your connectivity issue.” – Time’s Matt Peckham lashes out at Microsoft.

“These changes will impact some of the scenarios we previously announced for Xbox One. The sharing of games will work as it does today, you will simply share the disc. Downloaded titles cannot be shared or resold. Also, similar to today, playing disc based games will require that the disc be in the tray.” – Kyle Wanger of Gizmodo on Xbox One post-DRM saga.

“Fortunately we have a product for people who aren’t able to get some form of connectivity, it’s called Xbox 360,” President of the Interactive Entertainment Business at Microsoft, Don Mattrick, displaying 100% arrogance. 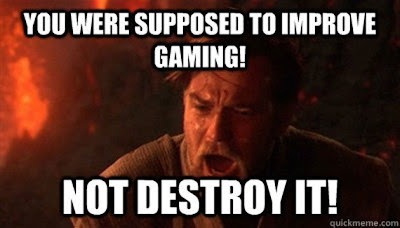 “Microsoft messed up on this one, Sony seized the opportunity. €399 and £329.” Industry analyst Michael patcher bashes the Xbox One immediately it was slammed with a $499 price tag.

“Little Jimmy, did I ever tell you about the days when I fought and won in the great Microsoft used-game/Internet check-in battle of ’13?” Kyle Orland of Arstechnica takes a swipe at Microsoft after failing to sell the future and retreating to the past.

“I noticed he was mass-downvoting a ton of posts and comments, and he kept switching to other tabs to make posts and comments of his own. I couldn’t make out exactly what he was posting, but I presumed he was doing RM (reputation management) and asked my boss about it later. According to my boss, MS have[sic] just brought in a huge sweep of SMM managers to handle reputation management for the Xbox One,” Business Insider reports that Microsoft had hired people to make positive comments about the Xbox One on reddit.

Do you see a pattern?  Eventually everyone thinks the Xbox One is a bad omen to gaming, a simple internet search on Xbox One brings out thousands of negative articles and it is Microsoft’s responsibility to CHANGE this negative consumer perception.  This perception can potentially kill Xbox One brand for Microsoft’s gaming division.

Despite the removal of DRM restrictions, the fact that Xbox One requires a “one-time” internet connection before the console functions properly coupled with the hefty price tag may continue to prevent positive PR articles from coming. Microsoft will need a special kind of gymnastic to pull this through.

Hand Picked For You:

Nosa is the Senior Editor of TechRez. Got a NEWS TIP related to this story -- or to anything else in the world of big tech? Please e-mail him: nosa[at]techrez.com. You can also connect with him via the connections below the box.

4 Easily Avoidable Mistakes That Made The PS4 Crush Xbox One

Three Weeks With The Tecno L9 Plus: What I Love The Most

Tecno Phantom 6: What We Want To See And What’s The Story So Far

Jumia Black Friday Deals 2015: Five Smartphones To Watch Out For

The Cheapest Smartphones In Nigeria You Can Buy Right Now

10 Cool Gadgets Every Geek Should Have